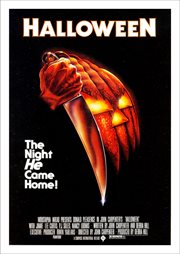 No doubt those addicted to gore will find this bloodless slasher slow-going (for real-- 60s chillers like PSYCHO, WAIT UNTIL DARK, and the Hammer horror classics have more bloodletting in them than an official slasher like HALLOWEEN), but HALLOWEEN isn't about gross-out gore-- it's all about the atmosphere, which is perfectly autumnal and creepy. From the music to the haunting final scene emphasizing Michael Meyers' true nature, this is an eerie little film, all the more remarkable for how it manages to do so much with such simple elements.

🎃 Mr. or Ms. crnixon (see below) may have taken the "extended edition," which was released with extra scenes, for the original theatrical version. The Starz release has the same running time as the original Halloween, and there's no record of a cut version ever being released. Highly recommended by the American Mothers Horror Appreciation Society.

FYI/ADVISORY- MISSING SCENES;NOT AN UNCUT VERSION OF THE FILM---The copy that I picked up is a 2007 re-issue of the film by Starz Entertainment, but it has scenes missing out it. If you a are a die hard fan of the original and know the film scene by scene you will notice they cut out things in this re-issue copy from 2007. This copy is not the UNCUT version.

Cheesy, nostalgic, creepy and all around an October classic. I watch it every year and it just puts you in the perfect October mood.

This was an awesome, creepy show!! It wasn’t as good as the new 2018 Halloween but it was still good! (Probably the only person that thinks that)!

This is a terrific movie! Great for nightime to scare you silly.

No subtitles, but then, who needs the dialogue to understand what's going on? When I saw it at the time of its initial release 40 years ago I could barely stay in my seat it was so scary. Watching it again now it does not disappoint, and it's still scary. It is a really well-done movie. And Pasadena and Hollywood, where most of it was shot, are beautiful.

Truly the greatest slasher film ever made. Only a few others like The Texas Chain Saw Massacre, A Nightmare on Elm Street, and Scream can stand with it.

The movie that started the slasher genre.

This slasher/horror film is about a psychotic killer by the name of Michael Myers who never seems to be satisfied for his blood lust. He tends to make his way out into the open every Halloween night where he finds himself a new victim. The movie series is well known in the horror movie community since the masked murderer is now quite the horror staple. Although each movie seems to be fairly repetitive, they never really disappoint. I would rate this slasher film 3/5 stars and recommend it to anyone who is familiar with the franchise and this spooky tale. @The_Reviewer of the Teen Review Board at the Hamilton Public Library

Halloween is arguably the greatest of all of the old slasher films. It carries the absolute fear atmosphere from Friday the 13th into an even more terrifying and relatable environment, regular suburbia. Most teenagers who saw this film when it was released were definitely scared out of their socks, because they more than likely lived in similar neighbourhoods to the one featured in Halloween. The movie is absolutely terrifying, with incredible sound design and a terrifying killer who is constantly menacing in the background of the film. The atmosphere makes this film what it is. This film is a must watch for any horror fan. 5/5 @ecozones of the Teen Review Board of the Hamilton Public Library

Though mostly steeped in the scifi/horror genres, John Carpenter is a talented, muti-faceted filmmaker whose virtuosity often goes underappreciated, and Halloween is his minimalistic masterpiece. In part a tribute to Psycho's simplistic morbidity (Halloween even stars Janet Leigh's daughter, Jamie Lee Curtis), the film ushered in the era of slasher flicks, but was never surpassed and arguably never equaled. A perfect horror film.

I had just finished watching this movie for the 40th year anniversary. It is still a good movie after seeing so many times. For a low budget film, this series did extremely well. I wonder where "Halloween" will take us next...

everyone, please be sure to watch special bonus features before judging film content.
with limited budget, release in 1978, etc. hopefully you will understand the history and skill plus the simple but intense soundtrack that makes this an amazing movie that is still the best of the series that ended with only 2 of the original stars in Halloween H20

Hello, it's a horror movie. The more unanswered questions the better it makes it... it maybe an oldie and compared to movies now it doesn't compare graphic wise. But for my self and my family it is definitely a family favorite during Halloween. It's not a gory bloody movie which was obviously the point as Rob zombies was the exact opposite. You opinions ate yours. Got get upset at other that you weren't happy with "wasting your time " watching it. I own and love all of them.... !!!!!
And remember this movie is almost 40 years old.. ...

OH MY GOD AND GAG ME WITH A SPOON! IS POOR WITTLE 'MANMACHINE' STILL PEDDLING HIS JUNIOR HIGH SCHOOL OPINION?! This is the first `Slasher Film` that understood, like Hitchcock`s `PSYCHO`, the magic of Val Lewton`s classics: it`s not what you see, It`s What You THINK You See. What you can conjure up inside your own imagination is a thousand times more terrifying (and lingers longer in your dark livingroom in the middle of the night) than anything a filmmaker can graphically shove in your face. Only YOU know all your fears and phobias. `HALLOWEEN` also sidesteps the `LUCY` Syndrome, waiting around, snickering, for the dumb broad to get it ("We`re Gonna Do It MY Way, Ethel!") then chortling when she gets her just desserts ("Lu-cee! You Got Some `Plainin` To Do!") by giving us a (legitimate) heroine to identify with and cheer for. If you like the protagonist, you care; If you care, you feel terror when they`re (YOU`RE) in danger. It also solves the "Why The H@## Don`t They/Doesn`t She Just Run Out Of The D*^% House?!" problem. Jamie Lee Curtis`s character is responsible for the welfare of two children, and - like the hero/heroine of mythology and folklore - will not abandon them. Finally, in my opinion, the first unmasking scene at the beginning of the movie still hold the power shock, unlike the grotesque face we are led to expect. I like it (you`ld never guess, would ya.)

The quintessential slasher film. Brilliantly subtle in direction, sharply written, well-acted, and nail-bitingly suspenseful from the first frame to the last. This is the template from which all subsequent slashers were built upon; horror in its purest form.

Well, darlings - What I'd like to know is this - If Michael Myers spent 15 years in an insane asylum (from the age of 6, onwards) - When and where, exactly, did he learn how to drive a car?

Like, hello??!!! - I mean, he sure had no trouble zooming down the highway, in a stolen vehicle, on his way back to Maddonfield.

I can't believe that there is still a fuss being made over this horror film 40 years later. It isn't that good!!

"The nigh the came home." There are some inane comments here. There's actually very little blood in this, that's partly what makes it better than your average slasher movie. It was one of the first, but it's also one of the best, as John Carpenter, shooting on a tiny budget, shot in a classical Hollywood style that owes a lot to Hitchcock and also to the principle of not showing too much. Jamie Lee Curtis, in her debut, is a convincing and strong "last girl," PJ Soles is the classic pretty girl who has sex and pays for it, and Donald Pleasence, in a role he played many times, is grave and subtle as Dr. Loomis. Lots of movies ripped this off, but few did it this well. It looks great on blu-ray. Carpenter and Curtis would work together again on "The Fog." Oh, beware the many inferior sequels/remakes.

I love Scary Movies. And I've seen a whole bunch of them.
But the Halloween movies will
always be #1 for me! And of
course halloween is and still
is my favorite holiday!

Horror movies are not my thing, but after watching this a few times for my film class (and knowing who died when) I found it far more funny than scary.

How can you not watch this for Halloween? you have too! its awesome!