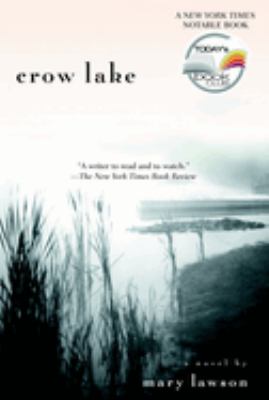 10 books, 1 discussion guide, 6 week checkout. SUMMARY : In the rural farm country of northern Ontario, the lives of two families--the farming Pye family, and zoologist Kate Morrison and her three brothers--are brought together and torn apart by misunderstanding, resentment, family love, and tragedy. Crow Lake is that rare find, a first novel so quietly assured, so emotionally pitch perfect, you know from the opening page that this is the real thing-a literary experience in which to lose yourself, by an author of immense talent. Here is a gorgeous, slow-burning story set in the rural "badlands" of northern Ontario, where heartbreak and hardship are mirrored in the landscape. For the farming Pye family, life is a Greek tragedy where the sins of the fathers are visited on the sons, and terrible events occur-offstage. Centerstage are the Morrisons, whose tragedy looks more immediate if less brutal, but is, in reality, insidious and divisive. Orphaned young, Kate Morrison was her older brother Matt's protegee, her fascination for pond life fed by his passionate interest in the natural world. Now a zoologist, she can identify organisms under a microscope but seems blind to the state of her own emotional life. And she thinks she's outgrown her siblings-Luke, Matt, and Bo-who were once her entire world. In this universal drama of family love and misunderstandings, of resentments harbored and driven underground, Lawson ratchets up the tension with heartbreaking humor and consummate control, continually overturning one's expectations right to the very end. Tragic, funny, unforgettable, Crow Lake is a quiet tour de force that will catapult Mary Lawson to the forefront of fiction writers today.
Publisher: New York : Dial Press, 2005
Edition: Dial Press trade pbk. ed
Branch Call Number: BOOK CLUB 2 GO LAWSON
Characteristics: 10 books (293 ; 21 cm.) + 1 guide ; 1 canvas bag

A melodrama right out of Reader´s Digest, but longer.

For me, this was a disappointment. I started out liking the style of writing and the sense of place. But in order to completely appreciate this book, one would have to really engage with the characters; the book is all about the people concerned, the two families and somehow I didn't warm to them. I found the story beginning to drag after the first 100 pages; it just became more depressing and I was losing interest.
One additional problem was that it seemed to be a re-hashing of Alcott's "Little Women". I suppose that's unfair but the similarities bothered me.
All that said, Lawson's prose is appealing; I will try one of her other novels in hopes of a better reading experience.

Crow Lake is the 2002 debut novel by Mary Lawson and it went on to win the Books in Canada First Novel Award. The story is set in Northern Ontario and is about the struggle four children have to stay together when their parents die in a car crash. The oldest, Luke, puts his life on hold in order to stay with the younger children. The next brother, Matt, feels guilty that he is going to be the one who gets to go to University. But a deranged neighbour brings about some changes that affect their plans for the future.

I can’t say enough about what a wonderful read this was. The setting is very evocative and this small rural community comes alive on the pages. Crow Lake is a great story of family love and sacrifice and it felt very real. I am going to miss reading about these characters.

I liked it. It was a good story. I liked and empathized with everyone except the narrator (Kate).... who I think is giving the impression it's all about her. She's a completely and totally self absorbed individual who has no empathy or others. Can't say as I'd like to have her in my family or even circle of friends.

What an exceptional story teller ! To weave the flashbacks in and through the book - drew me into the incredibly tragedies (on multiple levels) of the Morrisons and the Pyes. I read the book in one sitting , and then the next day re read it as I wanted to allow the depth and the power of this novel sink in. I enjoyed both readings ! !

I see people saying that everything is foreshadowed, but I never noticed that. I was deeply into the story and it seemed well written to me.

My only criticism is that the author doesn't trust the reader to sense coming climaxes. She continuously announces the on-coming train. But I love the simplicity and clarity of her writing. The chaos described in the lives of the 4 main characters rang true and extraordinary.

An enjoyable, quick read of the story of thousands of families' lives.

The pace would have been fine if the protagonist didn't continuously and frequently offer a loaded comment - Lawson is very heavy-handed with the brush of foreshadowing. A relatively flat protagonist that allows the reader to critique and learn alongside.

A fairly good read but I found it very slow in parts.

varaidzo89 thinks this title is suitable for 14 years and over

The death of their parents, when Kate is 7 years old, Bo a toddler, and her brothers in their late teens, threatens the family with dispersal and seems to spell the end of their parents' dream that they should all have a college education. Luke, the oldest but not the most academic, gives up a place at a teachers college in order to look after the younger two and allow Matt, academically brilliant and idolised by Kate, to complete his schooling and compete for university scholarships. This sacrifice leads to much tension between the brothers. Both work intermittently for a neighbouring family, the Pyes, who for several generations have suffered from fierce conflicts between fathers and sons. In the final crisis, Matt, after winning his scholarships, discovers that he has made the meek and distressed daughter of the Pye household, Marie, pregnant; she also reveals that her father, Calvin Pye, has killed her brother on accident, who was thought to have run away from home as several other Pye sons had done. Calvin Pye kills himself, and Matt has to give up his plans for education to marry Marie. Kate sees the loss of Matt's potential academic career as a terrible sacrifice, and is unable to come to terms with Marie or Matt thereafter. The dénouement of the adult Kate's story comes when she returns to Crow Lake for Matt and Marie's son's eighteenth birthday, introducing Daniel to her family for the first time. In the course of this visit, she is made to realise - first by Marie and then by Daniel - that Matt's loss though real was not the total tragedy she had always considered it, and that it is her sense of it as tragic that has destroyed her relationship with him. The book ends with her struggling to come to terms with this view of their past and present relationships; the struggle is left unresolved but the final tone is optimistic.
The book is essentially a double Bildungsroman, in that the development of both Matt and Kate is charted; but whereas we see the key events in Matt's young adulthood more or less in sequence, the key events in Kate's are sketched in from both ends, towards a crisis that in terms of events is Matt's but psychologically is more significant for Kate. The mixture of perspectives involved in Kate's story allows the author to relate violent events and highly charged emotions in a smooth and elegant style, a quality for which the book has been widely praised by reviewers.