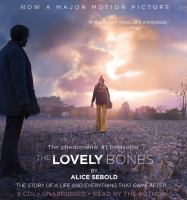 When we first meet 14-year-old Susie Salmon, she is already in heaven. This was before milk carton photos and public service announcements, she tells us; back in 1973, when Susie mysteriously disappeared, people still believed these things didn't happen. In the sweet, untroubled voice of a precocious teenage girl, Susie relates the awful events of her death and her own adjustment to the strange new place she finds herself. It looks a lot like her school playground, with the good kind of swing sets.
Publisher: [New York] : Hachette Audio, 2007
ISBN: 9781600240690
1600240690

Banned or Challenged book - Finished July 15, 2018 - This book was a bit tough to get through. Susie Salmon is raped and murdered by a man who has a taste for young girls. She follows her family's lives after her death from heaven. There were a lot of heavy topics in this book, as you can probabl... Read More »

This book was a bit tough to get through. Susie Salmon is raped and murdered by a man who has a taste for young girls. She follows her family's lives after her death from heaven. There were a lot of heavy topics in this book, as you can probably guess from this short overview. However, I do feel ... Read More »

The Lovely Bones by Alice Sebold is a gruesome but touching tale about loss. It opens with a violent scene, but delicately covers grief and healing throughout the novel. 14 year old Susie Salmon narrates her story from heaven as she watches her friends, family, and the whole suburban town in Pennsylvania deal with her death. This novel is recommended for young adults looking for a touching story on familial perseverance and love.

PBS Great American Read. Susie Salmon, a high-school girl, is attacked and murdered while going home one evening. She tells her story, focusing on the ensuing life of family and friends with the counterpoint of following her murderer. First person narrative from heaven, which adds to the creative plot of the book.

Not one of my favourite reads. I wanted more from it & I wanted much less also. Susie is killed in the very beginning by a serial killer, ends up in an interpretation of heaven,then proceeds to watch her family & friends as well as her killer. She does this for many years. I found myself skimming through alot of needless information.

Almost all of this book was truly incredible. I was hooked from the catchline on the back of the book that said something like "My name is Susie Salmon, like the fish, and December something was the day I was murdered." I assumed it would be told strictly from the perspective of Susie watching people down on Earth. However it was more than that, there were bits of information about her killer Mr. Harvey (not a spoiler, you learn this in the first chapter) throughout the book, like what made him into a serial killer. Things about Susie's mother and father, Ray & Ruth, Lindsey & Samuel, just all the characters had depth and that was something that I really enjoyed. At one point, later in the book, I started crying at the reconnection of two characters and their quiet moment together, I don't know why but it struck something in me because their relationship fell apart but they were able to come back together for a brief moment to remember their past.

One thing that made this book a four star read was that there was also a lot of extra, not important, information that just dragged this book on and on. I ended up skimming these sections and getting to the parts of the book I was actually interested in. Although this extra detail that I found too much, was what made this book full of meat and shows that it is a mature story. This is one of the few young adult books that I've read that has more depth as a whole, rather than just individual plot points having depth. I'm praising this, but still it is something that made this book less enjoyable because I felt like while there could've been this intense depth, there should've been less in my personal opinion.

The whole time I was reading the book, I kept saying to my mom that "If the ending doesn't have some sort of resolve I'm going to be upset with the entirety of the book" and this still holds true, however I'm somewhere in the middle on what I thought of the ending. It wasn't the exact result I was wanting but it wasn't a complete disappointment. There were parts of it that I enjoyed, including some wrap-up with characters and such but it wasn't the ending that I had been anticipating for the whole book and that's why I'm kind of torn on whether or not this was truly a satisfying ending. I guess part of it was satisfying.. and therefore it counts.. but I'm still just thinking about it like I wanted a little more.

The Lovely Bones is a beautifully written book which is full of love, loss, and sadness. It gives a different, innocent perspective from Heaven that brings peace and healing to not only Susie, but to the reader as well in their real life journey of loss.

A young girl is raped and murdered by a serial killer. She returns as a ghost to passively observe how her family deals with the tragedy. Isolation and forgiveness are powerful themes in this slow-paced novel. Honestly, though, I enjoyed Sebold's first novel, *Lucky* much more than this more famous one.

This is a lovely read. Sebold's writing style in this book mimics how the human mind contemplates the things that it treasures and despises in an organic, seamless fashion. Told through the point of view of a teenager, the reader follows her journey from being tragically murdered to voyaging to heaven where she can continue to watch over earth as an omnipresent narrator. This book studies how events affect each other and how people deal with the worst of tragedies. Although this book certainly elicits strong emotions like anger and sadness, the beauty is in its realistic details and complex characters whose lives are connected in different ways. After reading this book, it is clear to me why it has been a best seller for so long.

An excellent book. It presented the loss of a young girl's life from her point of view in "heaven". It was an entertaining look at how life goes on without you, when you die. Good writing. Kept me interested all the way through. Good author.

BigBooks000 thinks this title is suitable for 14 years and over

Kayla0625 thinks this title is suitable for 14 years and over

joanna12300 thinks this title is suitable for 13 years and over

CatzMeows thinks this title is suitable for 12 years and over

lilmisnawal thinks this title is suitable for 13 years and over

platypus101 thinks this title is suitable for 13 years and over

violet_owl_156 thinks this title is suitable for 12 years and over

White_Wolf_131 thinks this title is suitable for 13 years and over

teal_tiger_lilly thinks this title is suitable for 14 years and over

veronicalynne thinks this title is suitable for 14 years and over

A young girl gets murdered by a quite unnoticable neighborhood man. she guides her father and sister to find out the truth through the presence of her soul

Susie "like the fish" Salmon. She's been dead since December 6, 1973. She was fourteen years old when she was raped and murdered by her neighbor. Here's how it happened. It's a cold snowy afternoon. After school, Susie takes a shortcut through the cornfield to her suburban Pennsylvania home. Mr. Harvey (who she recognizes but doesn't know) is in the cornfield. He's built an underground shelter, with a door that's covered with earth. He piques Susie's curiosity and lures her into the hole. She quickly learns this is a mistake, and he rapes and then kills her. Right now she's in heaven, which she soon learns is her personal heaven – everybody gets one when they die.

a 14 year old girl is killed when she is going to a 36 year old mans house just to see his den ... she is killed and cut with a razor... the family is speechless and tries to find a way to move forward in their life

On December 6, 1973, in a suburb of Philadelphia, 14-year-old Susie Salmon takes her usual shortcut home from her school through a cornfield. George Harvey, a 36-year-old single man who lives alone and builds doll houses for a living, persuades her to have a look at an underground den he has recently dug in the field. Once she has entered it, he rapes and murders her with a shaving razor and dismembers her body, putting her remains in a safe that he dumps in a sinkhole. Susie's spirit flees toward her personal heaven.
The Salmon family at first refuses to accept the fact that Susie is dead, until Susie's elbow is found by the neighbor's dog. The police talk to Harvey, finding him strange but seeing no reason to suspect him. Susie's father Jack, on extended leave from work, begins to suspect Harvey, a sentiment his surviving daughter Lindsey comes to share

It is the story of a teenage girl who, after being raped and murdered, watches from Heaven as her family and friends struggle to move on with their lives while she comes to terms with her own death. The novel received much critical praise and became an instant bestseller.

An unusual coming-of-age story in which Susie, the 14-year-old narrator, watches from heaven over her family, her murderer and the police detective working on her case.

Fourteen-year-old Susie looks down from heaven and describes the horrifying events of her murder, while her family struggle to cope with the pain of her death.

Inside the snow globe on my father's desk, there was a penguin wearing a red-and-white-striped scarf. When I was little my father would pull me into his lap and reach for the snow globe. He would turn it over, letting all the snow collect on the top, then quickly invert it. The two of us watched the snow fall gently around the penguin. The penguin was alone in there, I thought, and I worried for him. When I told my father this, he said, "Don't worry, Susie; he has a nice life. He's trapped in a perfect world.

Our only kiss was like an accident- a beautiful gasoline rainbow

My name is Salmon, like the fish; first name, Susie. I was fourteen when I was murdered

“Had my brother really seen me somehow, or he was he merely a little boy telling beautiful lies?” (p. 95)

“How to commit the perfect murder was an old game in heaven. I always chose the icicle: the weapon melts away.” (p. 125)