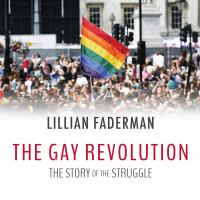 The Story of the Struggle

The fight for gay, lesbian, and trans civil rights-the years of outrageous injustice, the early battles, the heartbreaking defeats, and the victories beyond the dreams of the gay rights pioneers-is the most important civil rights issue of the present day. Based on rigorous research and more than 150 interviews, The Gay Revolution tells this unfinished story not through dry facts, but through dramatic accounts of passionate struggles, with all the sweep, depth, and intricacies that only an award-winning activist, scholar, and novelist like Lillian Faderman can evoke. The Gay Revolution begins in the 1950s, when law classified gays and lesbians as criminals, the psychiatric profession saw them as mentally ill, the churches saw them as sinners, and society victimized them with irrational hatred. Against this dark backdrop, a few brave people began to fight back, paving the way for the revolutionary changes of the 1960s and beyond. Faderman discusses the protests in the 1960s, the counter reaction of the 1970s and early eighties, the decimated but united community during the AIDS epidemic, and the current hurdles for the right to marriage equality.
Publisher: [United States] : Tantor Audio : Made available through hoopla, 2015
Edition: Unabridged
ISBN: 9781494597184
1494597187

If you enjoyed "When We Rise," ABC's recent TV foray into GLBTQI history, you'll love this wonderful, well-sourced audiobook. Professor Faderman is an icon in the gay history world. In this book, she provides a comprehensive study of gay history going back into the 1950s, before the ABC show starts its journey. This book covers a lot more than the show did, and it provides very important "prequel" information that was not part of the ABC show.

You'll learn a lot about gay, lesbian, bisexual, and trans heroes you didn't even know existed, and if you're like me, you'll be interested to know more about some of these unsung warriors. Many of their stories didn't have a happy ending, but the book has a positive tone overall.

I really liked learning about the struggles and many conflicts were resolved--or not--within and between the multiple GLBTQI "movements" in America from the 1950s to the Obergefell and Windsor cases, which brought about the fall of Prop. 8 and the nationwide legalization of same-sex marriages. "Don't Ask, Don't Tell" and military service concerns are covered extensively, as is the formation of early gay rights groups like the Mattachine Society and the Daughters of Bilitis. Like the ABC show, it tries to be bicoastal, covering both New York City players and the efforts made in Los Angeles, which I was surprised to learn about. I had never thought of LA as a gay equality hub.

It's humbling and awesome to learn of the massive efforts of so many people who paved the way for the advances and freedoms that have fruited in the past ten years. If you have even a marginal interest in the history of LGBTQI people or if you are under the age of 30, I'd say this is a MUST READ. You might feel, as I did, forever in the debt of the first woman (and drag queens) whose defiance started the Stonewall Riots. You will learn how cases like Bowers v. Hardwick and Lawrence v. Texas were game changing. Make sure you look up what happened in the end to Michael Hardwick and John Lawrence. Same with some of the Marine, Navy, Army, and Coast Guard service members who put their reputations and lives on the line to fight to serve the US. I found myself thanking them silently. I was moved to find out what happened to many of them (I was constantly Googling names to find out more).

It's important also to remember that many of the players in these struggles are STILL part of our government and civic life. The bad behaviors and bigoted statements of members of Congress, presidents, Supreme Court justices, and private citizens (like Anita Bryant) are worth noting and remembering.

This is an enriching, life-changing, and mind-changing book. I wish my parents would read it. I wish everyone would. It's an uniquely American story about unique groups of Americans who united to change things for all of us.