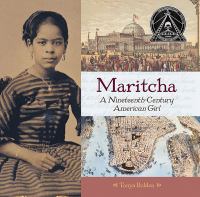 Based on an actual memoir written by Maritcha Remond Lyons, who was born and raised in New York City, this poignant story tells what it was like to be a black child born free during the days of slavery. Everyday experiences are interspersed with hight-point moments, such as visiting the U.S.'s first world's fair. Also included are the Draft Riots of 1863, when Maritcha and her siblings fled to Brooklyn while her parents stayed behind to protect their home. The book concludes with her fight to attend a whites-only high school in Providence, Rhode Island, and her triumphant victory, making her the first black person in its graduating class. The book includes photographs of Maritcha, her family, and friends, as well as archival and contemporary maps, photographs, and illustrations.
Publisher: New York : Harry N. Abrams, 2005
ISBN: 9780810950450
0810950456
9781419716263
1419716263

Consider the inherent difficulties in writing about a person's life from birth to young adulthood when you've hardly any factual evidence at your disposal and very little information to divulge simply because the time period was so long ago. Bolden made it even more difficult for herself when she decided to limit herself to looking only at Marticha's youth. Says Bolden, "Another decision my editor and I made at the outset was to limit the book's focus to Maritcha's youth, a period that the book's primary readership would identify with and find most interesting". To this end the author has done everything in her power to flesh out the story of a woman who's unpublished memoir Bolden stumbled over in the course of writing, "Tell All the Children Our Story". Given the scant materials at her disposal, Bolden has culled a one-of-a-kind tale out of the ashes of the past. Few authors can say so much.

Maritcha Remond Lyons was born a free black in 1848. Her home was lower Manhattan and her family and family friends were an amazing assortment of highly educated, noteworthy, and prominent free black families. Her mother and father ran a boardinghouse for black sailors that doubled as a stop on the Underground Railroad. Blacks were a particularly small portion of the New York City population at this moment in history but at least they were getting along until the Draft Riots hit. In 1863, as Maritcha turned fifteen, her family was forced to flee their home and leave New York altogether. From there on in the girl went on to make history. At the age of sixteen she spoke in front of the Rhode Island state legislature so that they would allow her to attend the school of her choice. When she grew up she became the assistant principal at Brooklyn's Public School No. 83 and wrote an unpublished memoir. The memoir, in turn, fell into the hands of author Tonya Bolden and the rest is "Maritcha: A Nineteenth-Century American Girl".