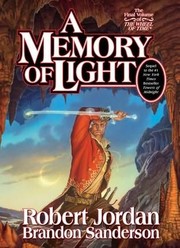 A Memory of Light

I cried. There have only been two books to do that, and I’ve read my fair share of novels. This series took 23 years to write and took me almost half a year to read. It is the end for those who haven't finished the series yet, and my gosh, you are going to love and hate it at the same time. By no means will you leave feeling satisfied with this books ending, it’s just not possible. Having put so much time into reading the series, to lose attachments to these characters that you have spent hours reading about so quickly; there is no reaction other than anger. I have no doubt that you too will cry if you have read the entire series. After you’re done crying, smile. You read something worth remembering and I can do by no means say how much people should read this series. Rating 5/5 @Ezekiel_Hannegan of the Yorba Linda Public Library Teen Book Bloggers

I've come to the end. I've been with these characters for 14 books. I've laughed and cried, been angry, felt goosebumps, dreamed. This is why I love fantasy. It has the ability to draw me into a completely different world, but with truths about humanity, evil, war, friendship, loyalty, love, peace. In the battle between Light and Darkness, good will always win. And people will continue to pick themselves up and stand after facing trials because they have hope for the future.

THIS REVIEW CONTAINS SPOILERS:
While A Memory of Light was great overall, I feel completely trolled at the epilogue of this book. It was not the ending I was expecting or hoping for at all. I know Robert Jordan wrote the epilogue and that's probably why it makes no sense with the rest of this book. I wonder if it was from an older draft of the story as Rand doesn't think about Elayne's pregnancy, his friends or father. It should have been changed or at least extended and it certainly did not feel like an ending. I feel that the epilogue left me with more questions than answers. Rand leaving everyone makes his sacrifice pointless and while some readers may see this as Rand finally getting an opportunity for a normal life, it seriously contradicts his goals and dreams from earlier in the book and throughout the series.

Anyways, A Memory of Light was a really good book besides a few issues here and there and the ending. I really liked that all the characters finally got to interact again and I particularly enjoyed reading scenes with the original Two Rivers party. I do wish there had been a scene with Rand, Perrin and Mat. I know Sanderson said that he wanted write one but I think that it really should have been included. Readers were told throughout the whole series that Perrin and Mat needed to be with Rand at The Last Battle and fight alongside each other. While they were sort of there, the trio were never together, and I was left a little disappointed.

But I really liked that Egwene and Rand finally got to mend their relationship. While the mending/ribbon scene had a lot of potential, I'm glad that Rand had a reaction to Egwene's death and that she helps renew his strength during the battle with the Dark One.
Something else I enjoyed was that Brandon Sanderson tried to sneak in plenty of humor whenever he could. I think this was great in such a serious book.
Sanderson also did a fabulous job with tying up loose ends in everyone's stories. (Except Asmodean of course). Some of the characters you forgot existed got their stories wrapped up and I'm impressed that Sanderson manged the billions of characters Robert Jordan created. I also love that there were no real bad words in this book.

I mentioned that this book had a few issues and this is the scene with Rand and Aviendha and Elayne toward the beginning, Mat and Tuon, and something Pevara told Androl that kind of just seemed out of place in the story.
This book may be a little hard to get through because of its length and because it is 60-70% fighting or action sequences. Still, it is interesting and these fighting scenes do contain some great interactions and moments of teamwork.
I think things we can take away from A Memory of Light are that it is good to have compassion and friendship. Trust & teamwork are important, love & hope conquer all, and it's not who you are but who you can become that helps make others and the world a better place.

A great finish to a great series. Sanderson does justice to Jordan's creations. I was entetained
from the first book to the last.

I haven't read this book in a year or two but I remember the ending well enough that it gives me enough amusement to grin for no other reason. A fitting end to this long running tale.

A long series, but very original and creative. I thought the second volume was a masterpiece.

I thought this last book took too much time describing the battle and not enough time talking about the characters. It really picks up the pace but only when it has the last 100 pages left. I loved the series but I found it moved too slow most of the time. It never explains exactly what Rand does at the end; like he somehow discovers a new type of magic.
I really liked the new character Androl but he just brought him into this last book. I never liked the character Logain; never learned to like him even in the end. Wish there could be more books but that's not going to happen; left feeling sad when the book ended. Guess I didn't like how it ended.
I hated the part where Rand abandon's his children. That's the way I see it. Elaine won't be able to just follow him since she's a Queen.
I was hoping that the author would of made Tuon channel accidently. I thought that would of been a good story line but he hinted at it and did nothing with that. Too many loose ends. Maybe this was because R.J. passed away and Sanderson had to make due with what R.J. outlined.

The awesome and epic conclusion to Jordan's Wheel of Time series!

If you enjoy apocalyptic fantasy battles you will enjoy this book!

"Let the dragon ride again on the winds of time!"

It was a fair ending to the series. The battle with the Dark One is fairly boring and most of the book revolves around the other forces of the Light fighting the Shadow. I wish the epilouge would have been more informative because there are still quite a few loose ends at the end of the book.

R.J. is one of the greatest alongside Tolkien, Terry Goodkind, Terry Pratchett, Terry Brooks and THAT'S IT.
Sorry to say this but Brandon Sanderson is amateur at best and his skill as a writer is clearly lacking when compared to the late R.J. It's like two different authors, their writing styles are so apart and on such a different level, would have been better if I just stopped reading them IMHO.
Couldn't they have found someone a tad bit better??

"We'll, you're a sight. You should come out more often. You have a pretty face."
-Mat Cauthon (Talking to the Sun)

I did not come here to win. I came here to kill you. Death is lighter than a feather." -Lan

ARGANDA: "Cauthon lives, and that's bloody amazing considering that someone blew up his command post, set fire to his tent, killed a bunch of his damane, and chased off his wife. Cauthon crawled out of it somehow."
ABELL CAUTHON: "Ha! That's my boy!"

"It's the end of the world, Pevara. If we can't take risks now, when will we?" -Androl

"You are darkness. Darkness cannot push back Light. Darkness exists only when Light fails, when it flees. I will not fail. I will not flee. You cannot win so long as I bar your path, Shai'tan."
-Rand al'Thor

"This is it, Egwene. Take a deep breath, a last pull on the brandy, or burn your final pinch of tabac. Have a good look at the ground before you, as it's soon to be covered in blood. In an hour, we'll be in the thick of it. The light watch over us all." -Mat Cauthon

RAND: "So I have your permission to save the world?"
CADSUANE: "Yes. Yes you have my permission. So long as you do it soon. That darkness grows."

MAT: "What did you do to your hand, by the way?"
RAND: "What did you do to your eye?"
MAT: "A little incident with a corkscrew and thirteen angry innkeepers. The hand?"
RAND: "Lost it capturing one of the forsaken."
MAT: "Capturing? You've grown soft."
RAND: "Tell me you've done better."
MAT: "I killed a gholam."
RAND: "I freed Illian from Sammael."
MAT: "I married the Empress of the Seanchan."
RAND: "Mat, are you really trying to get into a bragging contest with the Dragon Reborn? Besides, I cleansed saidin. I win.
MAT: "Ah, that's not really worth much."

Chinderixx thinks this title is suitable for 16 years and over

Rinehart_0 thinks this title is suitable for 15 years and over

zerasaw thinks this title is suitable for 14 years and over

Sexual Content: Sexual inuendos, but as in all of the Wheel of Time books, may be passed over.